Why Is Bitcoin Popular In Estonia?

So I was playing with Google Trends tonight and found something that I thought was really unusual.  When I started comparing references to different cryptocurrencies, Estonia was at the top of the chart for bitcoin. Why is bitcoin popular in Estonia?

Part of what made this somewhat humorous, and very curious to me is that you can barely see Estonia on the Google Trends map that goes with the above chart:

Can you see it? Maybe if you are extremely good with geography you might be able to find it. Here’s a larger map that might help you locate it: 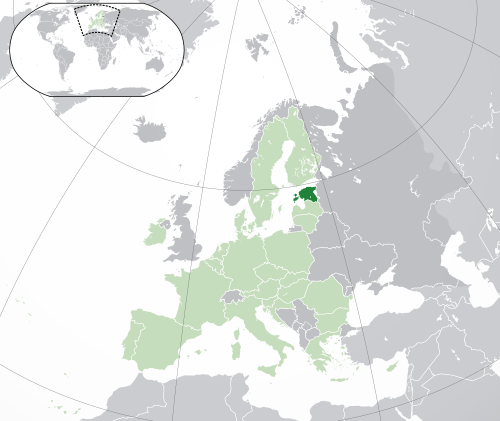 Estonia (in dark green) on a world map.

Setting Aside The Initial Humorous Curiosity

With 9,669 downloads of the bitcoin client and wallet to date, Estonia is ranked 56th worldwide. Lithuania is 45th, with 15,527 downloads, while Latvia lags behind its two neighbors at 59, with 7,918 downloads.

So Estonia is 56th in world rank.  That certainly doesn’t fit with the line of thought I’d had. To me, bitcoin would have had to be more common in Estonia for it to make sense that the actions of the Police would have such a major impact.

But if bitcoin isn’t that common in Estonia, then why is bitcoin a popular search in Estonia?   Certainly it’s hard to imagine that Estonia would be leading these searches when it is only the 56th in rank for bitcoin world-wide. The answer to this question was still alluding me.

Looking at http://localbitcoins.com shows that there are only five buyers / sellers of bitcoin in Estonia, so it doesn’t seem like there are a lot of large exchanges in Estonia.

But when I was just about perplexed by this Google Trends chart as I could be, I found a passage in an article that hints at the reason there is a high level of interest in Estonia: Bitcoin ‘Ponzi’ Concern Sparks Warning From Estonia Bank (via Bloomberg).  The key isn’t in the Ponzi Scheme aspect of the story, but rather in recent financial history of Estonia:

Estonia, Lithuania and Latvia, which joined the euro this year, got burned in 2008 as a real estate boom turned to bust and a global credit freeze hobbled exports. The three nations suffered the deepest recessions in Europe at the time, with Latvia’s economy contracting by more than a fifth in 2008-2009.

Okay, so this makes a more sense to me.  This particular region of the world (Estonia, Latvia and Lithuania) were hit heavily by the 2008 recession (all due to the sub-prime mortgage infestation into the financial system).  That seems (in my opinion) to have really shaken the faith people had placed in traditional financial systems in these countries.

As a result, there is major interest in bitcoin (and potentially other cryptocurrencies) in this region.  And now, the statements of the Estonian Central Bank, and the actions of the Estonian Police are likely serving to spike the search trends on Google. That is quite a bit more understandable.

While I was searching and reading articles trying to find a better explanation of the Google Trend, I came across another interesting story about Bitcoin in Estonia: A Bitcoin Castle Will Be Born In Estonia (via Bitcoin Examiner).  This article seems to be from March of this year (that’s a rough guess given that there isn’t a date of publication on the article itself), so I wonder what effect the current situation with the Central Bank and Police will have on this.